Don’t worry, we won’t spam you
or sell your information.

By signing up you agree to all the Terms and conditions.

Meet Future! Our time traveling hero is a young inventor with 4 A.I. sidekicks Robo, Roba, Ro and Bo who each have their own perks and glitches. Through every adventure Future goes through, we will learn the importance of privacy and security but most importantly can learn the fundamentals of programming and even machine learning basics and concepts through storytelling.

0 Days to go
0% Funded
Back This Project
Chicago, IL, United States (US)

Future of Authoring, Academia & Apprenticeship [FOA.PLUS] presents: Hey, Future! an adventurous comic book (and web series, hopefully with your help) with practical knowledge of the current technology to teach the basics and the fundamentals of technology through storytelling. Dexter’s Laboratory meets Rick & Morty meets Samurai Jack with a big twist… YOU!

This open-source collaboration project is one and first of its kind. Fact checking with the help of thousands of current and retired tech industry professionals in collaboration with hundreds and thousands of authors and writers to tell the story. During this ever evolving technological era, each episode and seasons are influenced by the latest trends and news in tech. 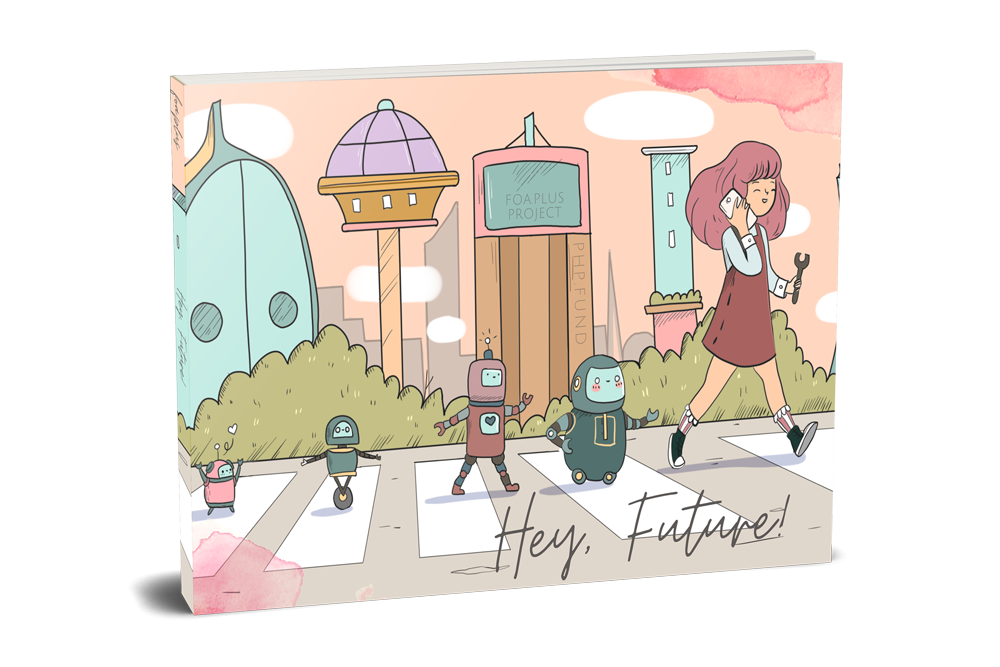 Learn security and firewalls from our mighty protector bot Robo. Learn the basics of wireless communications technologies such as WIFI, bluetooth and tunneling from our networking bot Roba. Learn digital design and architecture from our always trendy Ro and finally, learn the machine learning, pattern recognition and training from none other than the youngest of the group Bo. 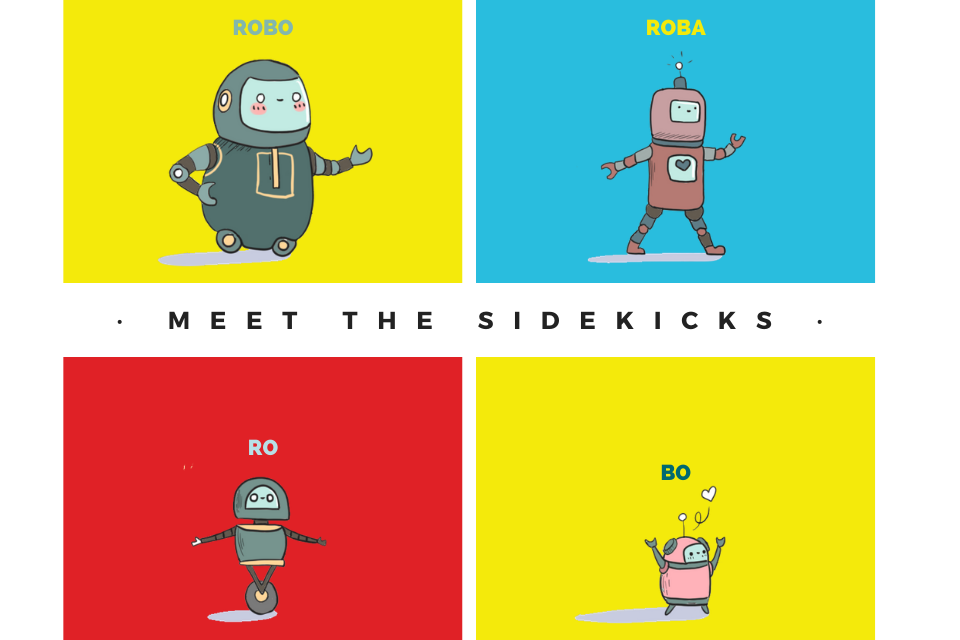 Robo is strong, secure and highly proficient in many different skills. Jack of all trades and master of even more! Only limit is the physical memory capacity. As with many powerful processors, the bottleneck in most cases is the limit of memory.

Roba is brilliant yet feisty. She is stubborn yet adaptable. It’s her way or no-way! She generates power with her internal nuclear fusion reactor so from time to time she is steaming… understandably so. You wouldn’t want to be on her bad side when things heat up.

Our fashionable Ro is the trend-setting architect of the group. She is smart, resilient and driven. She designs, she defines and she decorates the digital canvas with her expertise in HTML, JS, CSS, holograph and 3D. Each node of her python like arms extends and expands. When she rolls, she is lightning fast with her powerful engine leaving anything running on V8 or older in the dust.

Bo is the baby of the group so naturally no-one really listens to him although he ends up being right very much most of the time. He is the newest of the group so he has to learn everything (machine learning, deep learning, training data) but don’t let that fool you, because he is an important member of the group. He “translate, transmit and transcribe” messages found from the past in languages that are no longer spoken. First ever message Bo discovered came from the Time Engine Station (TES) #8783, approximate origin of the message is in the early 2000s.

One of the vulnerabilities of Bo since he deals with lot of messages is that he seldom catches the ILOVEYOU virus, sometimes referred to as Love Bug or Love Letter that throws our little sidekick into saying “i love you” uncontrollably and unexpectedly but luckily we have Robo, Roba and Ro to fix him up. Oh, Bo!! When will he learn?

They’re team of sidekick bots with ever evolving threats from the outside world. Their main enemies are viruses, worms and malwares. 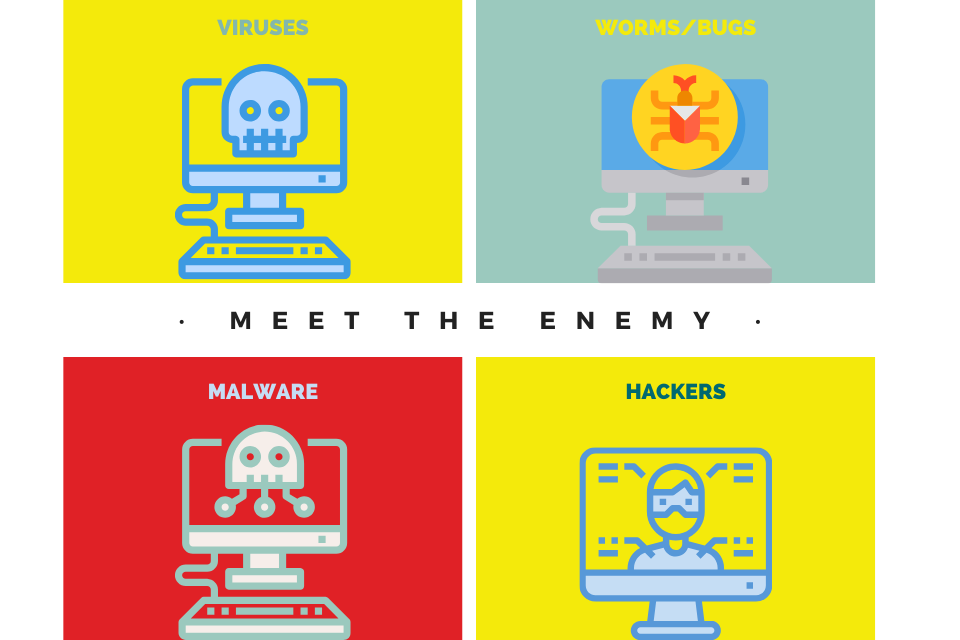 These are minor issues compared to what the future has to deal with depending on what world they end up inheriting from us.

Our protagonist Future will solely depend on the backers. Main character is open ended so backers can contribute and help decide who, what, where and when Future is. This is an open book, literally. Open-source project that anyone can contribute to building and growing our Future together. With knowledge and education, our Future’s potential is endless and with your help, we can bring Future to life!

Our Future learns from the past through messages found from TES#8783. Many of the messages are advices and well wishes from the early 21st century. Each episode/issue starts with newly found messages and Future finds creative solutions to solve these olden times problems with the help from the 4 sidekick bots.

To leave a message for Future and her 4 bots, you can call +1 (518) FOA-PLUS and we will transmit your message through Time Engine Station 8783. Let your message travel to the Future!

-v.001_issue.00_heyFuture.wav [Comic book / Stop Motion Animation]
—-Bo discovers a message spoken in language that sounds to be from the early 21st century, time period that changed everything forever…. or so we thought! Metadata of the .wav file reveals that the message was recorded from T.E.S.8783 which Roba learns the hidden meaning behind it.

-v.001_issue.01_readMe.md [Comedy Short Story / Animated Sitcom]
—-Upon closer examination of the wav file, Robo learns that there seems to be an encrypted coordinates inside the audio file. Should Future pull on this message thread?

Each issue/short story will be written by multiple writers and authors in multiple different genres and writing styles to showcase the authorship and the potentiality of combination of genres and fusion of different literary styles while showcasing the endless potential of collaboration and teamwork. Furthermore, each narrative poetry or short story will be transformed into an episode of a web series performed and created in many different styles of story telling whether that’d be shadow puppetry, stop motion, animation, cartoon and even hopefully live action some day in the… future.

Just like storytelling which has its roots in our ancestry from the ancient times through cave drawing to oral traditions and told from generation through generation. “Hey, Future!” is a newly open-ended open-source collaboration based storyline told in many different styles and genres in which it represents the story about the style and genres of the arts and authoring itself. So, help us authors and creators help us as a whole humanity to tell our story for our future. What is our legacy? Collaboration and coming together!

Word from the Creator

Each of the projects I create (PHP.FUND, FOA.PLUS, SAAN.PLUS & SD4SD) with the intention to save the world for Future are represented by these 4 bots who are inspired by my family members and the influence they had on me growing up. To whomever inherits these projects in the future, I dedicate these little hopeful wishes to you!

The inevitability of million years from today is as inevitable as the rising of the sun tomorrow. And in that inevitable future, may the sun still be shining brightly on our greatest grandchildren of the future! And for them, let us write this story together that will travel through time for us! Let us send them a message about the goodness of humanity and let us show them that our generation were THE GENERATION that turned the tide. What is life but a story and may their stories have a happy ending!

One of the most rewarding endeavors and fulfilling purposes “of life is to plant trees, under whose shade you do not expect to sit.”

You get to suggest organizations and projects the 100% of the proceeds from the sales will go towards.

Suggest + help decide where and which organization the proceeds of the sales of this project should go towards.

Join the authors and artists private group chat and help decide where the story should go.

Co-creator credit for all future prints and publications of Hey, Future!

About the campaign creator

There are no reviews yet.

“Problem is only hard in relation to soft will!” – PHP.FUND